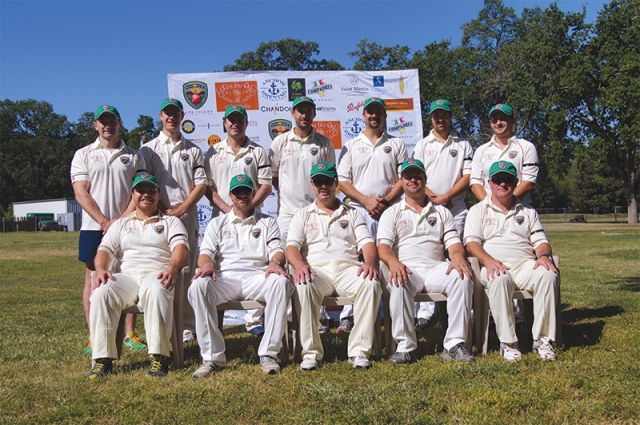 The international influence in the Napa Valley is undeniable. The influence of Spain and Mexico runs deep, as evidenced by the history of local land-grants from both the Spanish and, later, Mexican governments nearly two centuries ago. Many early settlers also came from Europe, bringing traditions from Italy, France and Germany that have had a lasting impact on our local lifestyle, wine and cuisine.

Today, modern-day immigrants, many of whom come to Napa to learn more about or work in the business of wine, continue to influence the fabric of our deeply-diverse community. One of the latest international influences to locally make itself
at home, is the game of cricket.

Cricket. What is it?

Most of us are familiar with soccer, baseball, football, basketball, and even the rapidly-rising-in-popularity game of lacrosse. Now, a serious group of locals have sparked an organized club of cricket players. Cricket? What is it?

One of Napa’s most creative and enterprising recent transplants is Andrew Healy who arrived from Ireland a few years ago. Healy is a co-founder of the Napa Valley Cricket Club (NVCC) which, in 2015, after a mere four years in existence, has a membership of players from countries in addition to Ireland, including Australia, England, India, New Zealand, Pakistan and South Africa, as well as a handful of Americans within the nearly 60-person
membership roster.

“Cricket is both a great game to play and watch in my opinion,” explains Healy. “It’s similar to baseball in that it’s very tactical, but differs in a number of ways, the most obvious one being that the ‘pitch’ – the area that we bat in – is in the middle of the field as opposed to at the edge. Batsmen also stay in and can score multiple runs while at bat and on-field decisions are made by the captain on the field as opposed to a coach on the sidelines, or in the dugout.”

While it may sound confusing, Healy went on to add, “We are actually lucky that we have baseball to compare cricket to when explaining the games to inquisitive locals. Baseball’s origins are found partly in cricket, so some of the principles of the game are similar. The fielding team is trying to get the batting team out while the batting team is trying to score as many runs as possible. They take turns in doing this – more times in baseball depending on the number of innings, as cricket teams generally get to bat only once.”

According to Healy, more detailed descriptions of playing include the fact that bowlers, the cricket equivalent of pitchers, have their bag of tricks to get the batsman out too. Different bowlers have different styles that the on-field captain can use to keep the batsman guessing by rotating through the bowlers. The bat that the batsmen use is very different from baseball, being flat on one side and the batsmen use it to play their shots in a full 360-degree range, given that the pitch is received in the center of the field.

It is difficult for me to imagine the biggest notable difference: fielders catch the ball bare-handed, without wearing a glove! Healy describes a cricket ball as fractionally larger, and slightly harder, than a baseball, “They say in cricket that ‘catches win matches’ so this ‘no glove catching’ can be the difference between winning and losing games, and often it is!”

Cricket. Where did it come from?

From where did cricket come? Cricket is a worldly sport, carried around the world centuries ago.

According to Napa Valley Cricket Club President, Phil Bourke, originally from Victoria, Australia, and a local, wine-industry
professional who has resided in Napa for a decade, “as many other sports, it originated in England back in the 17th century and then spread around the world with the British Empire. It was, up until the time of the Civil War, even the dominant, summer sport in America. It remains a dominant sport in many parts of the former empire including Australia, New Zealand, India, Pakistan, South Africa, the West Indies and others, as well as England itself, of course.”

“The first-ever international game between two countries was in 1844 when the USA played Canada. While the rules
may seem to be complicated at first, watching or playing a game or two will soon have people hooked,” Healy shared. “In one game last year we put out a team that had players from seven countries, a truly international game being played right here in the Napa Valley.”

As it turns out, cricket is the second-most played sport in the world after soccer and is played in more than 100 countries.

The worldly play of the game explains the internationally-diverse team in the Napa Valley. “When you grow up with a game, it’s sort of ‘in your blood’ for a lot of the club members. Some first held a cricket bat not long after they could walk, while some have come to the game more recently having watched the game their whole lives,” said Healy.

When I first heard about the game of cricket, I was curious about the large population of expats involved in the sport. As Bourke explained,“cricket is the dominant sport in the British Commonwealth countries, so the expats who play have all grown up playing or watching cricket, just as an American would with baseball.  One great thing about cricket is that it is very much played as a ‘club’ sport around the world, with both the playing and social members getting together after games and for other social events. I think a lot of the expats, while being keen followers of American sports and particularly the local professional teams, miss that club atmosphere. We have strived to reproduce that environment here and that has appealed to our members, both expats and locals,” said Bourke who went on to declare, “Most other clubs around the area, and probably the country to be honest, are mostly made up of expats. However, in Napa, we are working hard to encourage Americans to either take up cricket, or at least be involved in a social way. In addition to those we have playing this year, we have more who have simply joined as members for the social side. The future of cricket in the US is definitely dependent on its moving from being an expat sport to one enjoyed by Americans.”

Both Healy and Bourke said that the NVCC welcomes new adult players of all skill levels as it fits squarely with their principle of social cricket. They hold weekly nets sessions, usually indoor in Napa, but occasionally, outdoor in Calistoga. At the nets session there is an opportunity to learn about bowling (pitching) and batting, by donning pads and gloves and experiencing the difference in batting in cricket as compared to baseball. If newbies enjoy that experience, they may want to play a game. In a typical season (which runs from April through October) the club has about 15 games scheduled.

New to this game, I also wondered if it was a brutal and demanding sport. According to Healy, brutal, no. Physically demanding depends on the level of play, “If you’re at the top level of international or even national cricket you are considered an elite athlete and with that comes the pressures to be strong and fit, as cricket has become a 12-month game. Closer
to home at NVCC, some of the members are in their 50s, and some of their opposition teams have had players in their 70s,
proving that if the mind is willing and the body is too, cricket can be played by players of any age!”

Women play cricket too, and the sport for females is growing internationally and in America. Healy stated that a number the top cricketing countries internationally now have professionally-paid women’s teams, and that the International Cricket Council plans to have cricket as a women’s Olympic sport and therefore must be on an equal footing to the men’s sport in terms of participation at international level. In Northern California, the Firebirds women’s cricket team competes in the Bay Area Cricket Alliance League in the South Bay.

If you are more of a sports spectator, the NVCC welcomes crowds! Both Healy and Bourke agree that the easiest way to become involved is to attend one of the local cricket games. If you simply introduce yourself to one of the players, they will be happy to explain the rules. “We love having people come and watch our games and we have a busy schedule through the end of 2015,” added Healy. The best place to check the schedule is on the club calendar on the website at napacricket.com and the games are always free. In August, there are three games scheduled in Calistoga. “Pack your chair, sunscreen and a picnic basket and head to the Calistoga Fairgrounds for a game of cricket,” he added. Weekend games usually start at 10:30 a.m. and last until about 4:00 p.m. with a civilized break for lunch.

Newcomers are also welcome to the weekly training sessions, currently held at Put Me In Coach, 2371 Pine Street in Napa, usually on Thursdays beginning at 7:15 p.m. (however, it is best to check the website as the training sessions are occasionally held on their home field in Calistoga).

Another way that locals can get involved is by participating in the newly-formed, Last Man Stands. Currently played in several countries around the world, the NVCC was part of the US launch last fall and will participate again this year. These eight-a-side games (a normal cricket match is 11-a-side) last for only two hours, involve a lot of action, and have even adopted some concepts from baseball, including a “double play.” More information at lastmanstands.com.

The NVCC also ran a cricket pilot-program at Vichy Elementary School earlier this year, running sessions and, finally, a small game with students. Directed by club President, Bourke, the program was created in conjunction with the US Youth Cricket Association and included video instruction on the basics of the game and hands-on skills clinics on batting, bowling and fielding, in addition to a game at the end of the school year. NVCC hopes to continue this program in the coming school
year with the possibility of Irish-born, club–member, Caen Healy, a class of 2016 Senior at Napa High School, planning to base his senior project on the program that the NVCC launched.

Finally, Bourke mentions that the most famous and most historic cricket series is underway in England; known as “The Ashes” and dating back to 1882. It is held once every 18 months between England and Australia and can be viewed for free as the games are aired from now through late August if one has access to WatchESPN. These are ‘test matches’ according to Bourke, who explains that each game can last up to five days of about six hours play per day, so there is a lot of time to watch!

Ready to watch? Ready to play? Game on!

For schedule and team information, contact the Napa Valley Cricket Club at:  napacricket.com